The Rhine and the Maas rivers used to flow into the sea via the Haringvliet. Following the construction of the Haringvliet dam in 1970, as part of the Delta Plan, the estuary became a freshwater lake and it became largely unaffected by the tide. Fish were no longer able to migrate and biodiversity decreased.

In 2018 Rijkswaterstaat is going to open the Haringvliet sluices partially as a result of pressure from, among others, the International Commission for the Protection of the Rhine. This will make it possible for fish to migrate again through the Haringvliet and the brackish water region in the western part will also be restored. The Haringvliet Dream Fund project is a response to this by six nature organisations in the form of plans for nature development (e.g. the restoration of tidal nature, the reintroduction of the sturgeon, the construction of shellfish beds), the improvement of the accessibility and enhancement of the possibilities for enjoying nature. This has caught on in the region. The provincial authorities of Zuid-Holland, the surrounding municipalities and other organisations and entrepreneurs are now also involved.

Allowing the sea to exert its influence again in the Haringvliet means it is regaining its natural dynamic. By the time the project is finished, approximately 100 hectares of nature will have been added, and hundreds of hectares of nature improved and, as a result of the partial opening, migrating fish such as sturgeon, salmon and eel will once again be able to move from the sea into the rivers and vice versa. The (new) nature in combination with the various new and innovative recreational provisions facilities is making the Haringvliet a tourist attraction of international allure.

Since February 2015 work has been carried out on more than 30 initiatives and projects of various sizes in the Haringvliet and surrounding area. In all instances the focus is on (new) nature and related new recreational possibilities.

Approximately 25 million euros is being invested in the Haringvliet via the Haringvliet Dream Fund project. Half this amount has come from the National Postcode Lottery and the other half is being provided by the provincial government of Zuid-Holland, entrepreneurs, municipalities, nature organisations, international funds and other organisations.

The initiators of the Dream Fund Project are the World Wildlife Fund for Nature (WWF), the Society for the Preservation of Nature in the Netherlands [Natuurmonumenten], ARK Natuurontwikkeling, Sportvisserij Nederland, National Forest Service in the Netherlands [Staatsbosbeheer] and Netherlands Association for the Protection of Birds [Vogelbescherming Nederland]. The cooperation will lead to, among other things, the creation of the Landschapstafel Haringvliet, which is an organisation for cooperation between Dream Fund participants, municipalities, the leisure industry, business and entrepreneurs. The Dream Fund Project Haringvliet is also one of the initiators of the NLDelta Biesbosch-Haringvliet National Park. This initiative was awarded the expert jury prize at the contest for the most attractive nature reserve in the Netherlands.

The Haringvliet Sluices decree [Kierbesluit Haringvliet] was adopted in 2013. It is being implemented by Rijkswaterstaat. After years of preparation (see below) the sluices are going to be partially opened in 2018 to create a brackish tidal area in the western part of the Haringvliet. The Dream Fund Project has responded to this in six ways.

On both banks, existing and new nature reserves are to be laid out in such a way that parts are exposed at low tide and then flood during high tide. This will allow the return of animal and plant species that belong in the delta. When the project has been completed, approximately 100 hectares of new nature will have been realised, and hundreds of hectares of nature improved, thereby creating an interesting tidal habitat with, for example, nutritious feeding grounds for birds.

Once upon a time 20% of the bottom of the North Sea consisted of shellfish beds which were home to extremely diverse aquatic lifeforms. These days almost nothing remains. The Dream Fund Project is working on the construction of shellfish beds in the Voordelta (in other words at sea).

In around 1950 the European Atlantic sturgeon disappeared from the Rhine due to pollution and overfishing. The Rhine is now cleaner and, from 2018 onwards, a second migratory fish route is going to be created via the Haringvliet to complement the Nieuwe Waterweg. Within the framework of the Dream Fund Project, work is focusing on reintroduction in collaboration with a breeding centre in France. The aim is for sturgeon to be able to swim in and out of the Delta via the Haringvliet in a few years' time. Besides the sturgeon, the expectation is that a further 15 other migratory fish species will be able to benefit from the partial opening of the sluices.

The development of migratory fish and birds is being particularly closely monitored because it provides a good indication of the quality of nature in the new tidal area. Up to now data has been collected for a baseline measurement, in addition to data from before the Haringvliet was closed off in 1970. The idea is to involve hundreds of anglers and birdwatchers in future assessments.

Migratory fish, such as salmon and eel, have started to flourish in the Netherlands in recent years thanks to (inter)national protective measures. In close consultation and collaboration with the commercial fishing sector, anglers and the Ministry of Economic Affairs and Climate Policy, the participants in the Dream Fund Project are striving to protect migratory fish in the water inside and outside the Haringvliet. The aim is sustainable fishing which is in balance with the system's capacity (ecology).

The aforementioned developments are turning the Haringvliet and the surroundings into an area with international allure and that offers opportunities for the recreational sector and the regional economy. This is being backed up with suitable but appealing facilities. The participation in 2016 of the NLDelta Biesbosch-Haringvliet partnership in the 'Most attractive nature reserve in the Netherlands' competition was an important way of publicising the Haringvliet. The partnership won the expert jury prize and is going to work towards the creation of a single Biesbosch-Haringvliet national park.

Fresh water for the islands

The restoration of the brackish water region in the western part of the Haringvliet due to the partial opening of the sluices will not have any effect on the water management and the drinking water supply on the local islands. The government bodies involved have implemented compensatory measures to ensure that fresh water continues to be supplied to the agricultural land on Voorne-Putten and Goeree-Overflakkee. Drinking water company Evides is also relocating its fresh water extraction activities for the supply of drinking water 14 kilometres eastwards. 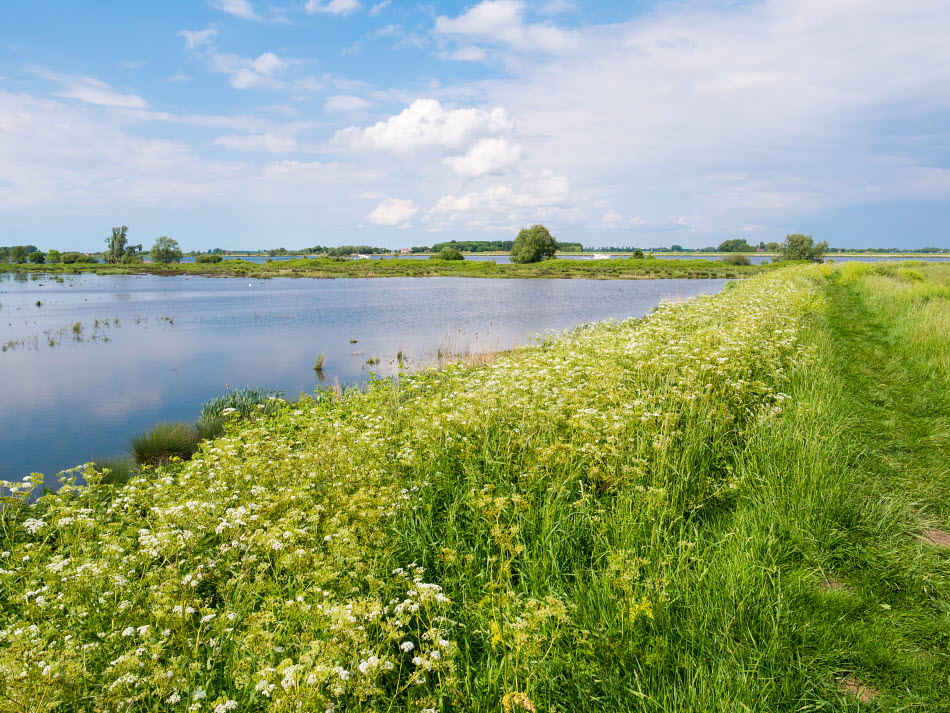