Urban Farmers 002 is an urban farm and fish farm in an old factory in The Hague. It is one of the largest rooftop farms in Europe. Following a pilot project in Basel the Swiss parent company, UrbanFarmers, has established a second branch here and is looking to set up more in other European cities. The aim is to provide city dwellers with fresh food which has been produced sustainably in their neighbourhoods. On the top floor of the building is a fish farm and vegetables are being produced in a greenhouse on the roof without using any pesticides. The plants are growing on the waste water from the fish farm, which is purified in the process as a result. Once oxygen has been added, the water can be reused in the fish farm. The aim is to produce and sell 50 tons of vegetables and 20 tons of fish every year from 2018 onwards.

Urban Farmers 002 combines an innovative approach of 'symbiotic' greenhouse horticulture and fish farming (aquaponics) with local sales and education. For the municipality of The Hague the arrival of UrbanFarmers was the reason for turning the entire building into a centre for inner-city food production (vertical farming) and food awareness: The New Farm.

Urban Farmers 002 (UF 002) has been operating since the spring of 2016. The greenhouse on the roof covers an area of 1,200 square metres and the fish farm is 700 square metres in size. Fish and vegetables from UF 002 are currently sold to restaurants and consumers in The Hague, for example at the weekly 'roof market' organised specially for city residents. The aim is to provide high quality products, not to compete with supermarket prices. The added value for customers is the local and sustainable production method. The ambition of UrbanFarmers is to make sustainable and local food production on urban farms a worldwide success.

In addition to UF 002 (roof and top floor) the third floor of The New Farm has, for the past 20 years, been home to the Cooking Factory [Kookfabriek], a company that organises cooking workshops and meetings. The other half of the third floor consists of a multifunctional space which can be used for meetings, seminars, etc.

The municipality of The Hague has issued instructions for the entire premises of The New Farm, with a total floor area of 9,000 square metres, to be used as an international knowledge centre for urban food production and food awareness. A demonstration and innovation centre is being worked on in collaboration with businesses and knowledge institutions of various sizes. The aim is to develop, test and exhibit new technologies which may play a role in issues relating to supplying cities with food.

Talks are currently going on with various other parties. The idea is to set up a Living Lab for vertical farming which companies, educational institutions, researchers and consumers can use for joint innovation. An incubator for start-ups is also involved.

The fourth floor is going to be used for small vertical farms, of which the first is called 'Haagse Zwam', where oyster mushrooms are being cultivated. There is also space for the cultivation of insects and seaweed (new sources of food which are extremely suitable meat substitutes). Talks are also going on about cultivating algae.

Lokaal is hot. In recent years hundreds of urban farming initiatives have taken off in Dutch cities. Initiators are responding to the increased awareness among citizens about food and the importance of local production. People know where locally produced food comes from, who has produced it and how it has grown, rather than eating food that has been supplied from another corner of the globe. The aim of many of those initially involved is to raise awareness about the origin and growth of food and, at the same time, reduce the need to transport food throughout the world.

The scale of initiatives and businesses is broad and ranges from neighbourhood gardens and businesses with a social (secondary) goal (e.g. reintegration) to commercial high-tech food production. Urban agriculture takes place in neighbourhood gardens and on vegetable gardens, in empty industrial and office buildings, industrial estates and business parks and on waste ground which is waiting to be developed. As a result, urban agriculture in these locations is often temporary in nature. Such projects help to make areas look green and well-organised. They prevent areas from becoming run down and offer opportunities to people who are far removed from the job market, as well as stimulating local economic development, education and social cohesion.

Urban Farmers 002 (UF 002) in The Hague represents a recent form of urban agriculture known as vertical farming. Vertical farming involves the optimally controlled and enclosed cultivation of (usually) vegetables in storeys, one on top of the other, as a result of which pesticides do not have to be used. Currently the only disadvantage of vertical farming is the high energy consumption (for, among other things, lighting). These are highly technological an intensive cultivation systems of a commercial nature. The idea behind this is that more and more people around the world are starting to live in cities, meaning that intensive food production in urban areas is essential. One similarity with the more social projects for urban agriculture is the importance of food awareness and the benefits of local production.

A different view of the city

What links the various different manifestations of urban agriculture is that they view the urban environment from the perspective of the theme of 'food'. In contrast to 'agriculture for the global market' with its globally organised chains, many 'food kilometres' and considerable scale, the focus of urban agriculture is on local production, regional chains and on creating a bond between consumers and the products and producers. Viewing 'food and the city' together leads to a different perspective:

In recent years urban agriculture businesses have started at various locations in Rotterdam. The social return of these businesses is considered to be substantial, in the sense of social cohesion, participation and employment, health, quality of life and recreation. The economic return is less clear and that is why the municipality decided to investigate.

In 2014 the nine businesses studied had a total turnover of 2.4 million euros, of which approximately half come from hospitality industry activities. For most of the businesses, urban agriculture is a means of achieving social goals, such as activation, social cohesion and a sustainable district. The businesses receive a large portion of the income from subsidies and funds.

Growth will require (further) professionalisation in the field of marketing and promotion, sustainable cultivation, the hospitality industry, dealing with psychosocial problems and financial policy. The report's authors also advise the businesses to ensure that their earning model is less dependent on subsidies by working on structural relationships with various customers, such as the municipality, housing corporations and welfare institutions (also, for example, as 'launching customer'). 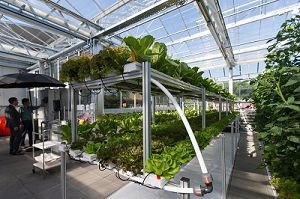