Atlas Natural Capital
Back to top
What is it?

Greenery, water and air flows have a cooling effect on the urban climate. In the summer months, inner cities can be up to seven degrees hotter than the surrounding countryside, due to the so‑called 'urban heat island effect'. The main causes of that effect are:

Many people experience health problems during heat waves. In the Netherlands, thirty more people die per week for every degree that the temperature rises above the long-term average. By designing cities to take advantage of the cooling effects of greenery, water and/or air flow, the build-up of heat can be substantially reduced.

The proportion of the population who live in towns and cities is rising, meaning that an increasing percentage of us are affected by the accumulation of heat. Because the Netherlands has an aging population, the number of people suffering seasonal health problems will rise unless more is done to harness the cooling potential of greenery. Urban greenery has a positive effect on climate control in cities and on the health of the population.

When designing new housing and new cities, more emphasis can be placed on creating green areas and water bodies, and on enabling cooler air to enter and circulate. Green roofs, gardens, parks and trees are all features that help to keep the city cooler. Providing existing cities and districts with cooling features is more challenging. Therefor the region of Haaglanden has developed  a joint strategy and an interactive climate atlas. However, green roofs, gardens and walls can easily be incorporated into the established urban landscape and require little or no extra space. 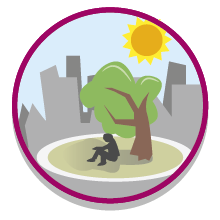